What is the Thames Tideway Project, London ?

The City of London is nearly 2000 years old, first founded by the Romans.

It has since grown and grown to become one of the worlds largest and best financial capitals.

Unfortunately this great city, whilst a lot of it is updated and cutting edge, the city still relies on an outdated sewer system which is over 150 years old. 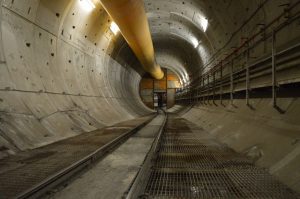 With an ever increasing population in an ever shrinking world, this has caused massive problems with leakage into the river Thames and surrounding areas. This pollution is only set to increase.

The Thames Tideway Project is building an up to date ‘Super Sewer’ system which will use a whopping 25km tunnel. This is set to help clean up the city’s water sources, environment and protect its wildlife and inhabitants for the future.

New Security were approached by the Thames Tideway project to come up wit a solution for fire protection within the tunnel.

We designed, manufactured and installed a 1 hour rated certified Fire shutter which was a whopping 5 metres in width!

This shutter door was linked into the tunnels fire alarm system, allowing it to be driven down in the event of a fire, creating a fire wall built of 20 gauge steel.