Subway Franchises use New Security to secure their premises

New Security has installed multiple roller shutter doors for the Subway services on the A9 and 3 Steel security/Fire exit doors in total.

The roller shutters we installed were all powder coated to the specific green RAL number that is used for all Subway sandwich shops. We secured all of the front windows and main entrance with the New SecurityShield75c continentel style 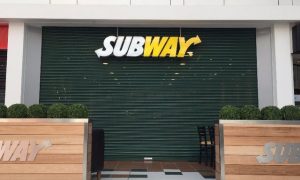 The shop windows used an RTS remote control system which allowed all shutters around the building on windows to be controlled of one remote. This makes it a whole lot easier for staff when locking up at night and opening in the morning.

The RTS system feature a built in radio receiver within the shutter motors themselves which means they only need to be plugged in to a power outlet. This can cut the expense of having fuse spurs put in but also cuts down on the amount of control panels, switches and wiring needed. Great if you want to keep your walls clear of conduit and other electrical accessories.

The main entrance used an electric New SecurityShield75 roller shutter door also, but instead of the RTS system it used a garage door style control panel which allowed not only remote control, but an optical safety edge on the bottom of the door which would allow the door to be closed automatically. The safety edge ensures that if anything is blocking its oath upon decent, that it will stop and return.

The rear back door was secured by a standard level security door. This featured just the one lock and was bolted securely to a box section frame which we fabricated and installed.

In the middle of the night when the store was closed, Subway was subject to an attempted burglary. An easy target due to the remoteness of the subway shop on the services at night. 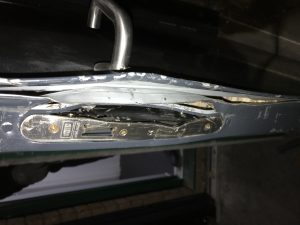 According to CCTV it took the thieves a whopping 30 minutes to bend the one lock!! Once the door was open, they were only met with yet another door and decided to give up. Success! The New Security door did its job in delaying and deterring the thieves meaning they got away with nothing! 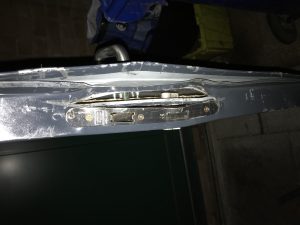 We were then contacted to come and replace the door with a brand new one, this time we added 3 extra deadbolt lock mechanisms to the door from top to bottom leaving us confident that someone would not even attempt in the future. If the one lock could last 30 minutes, then 3 would last up to 2 hours of constant attack by 2 men and tools.